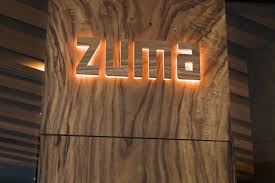 I have to be honest here and admit I have an obsession… it’s true and I can’t deny it any longer, it’s time to just be totally transparent here, OK I’m a FOODIE!  There I did it and it was pretty painless.  Yes…I, like many of you out there simply love food, but not just any kind of food, you see I love really really good food (pretty unique right?). On many occasions you can find me sitting at a restaurant’s bar sampling different options off the menu and writing my posts.  I am not one of the internet influencers snapping hundreds of pics of the plates I am ordering and posting them on Instagram… however, when a restaurant effects me strongly whether its super good or bad, it just might move me to write about it and on this particular outing it did just that!

My college roommate and one of my best and oldest friends, Barry and his new bride Helen invited me to stop in Saturday nite and head off to try the restaurant at the newly opened FOUR SEASONS in the Back Bay neighborhood in Boston.  Boston is one of the few cities to claim two Four Seasons Hotels.  The original located across from the Boston Commons on Boylston Street is quite high end and the food is pretty darn good (and pricey of course), so I was psyched to try ZUMA, located at the new Four Seasons sandwiched in between the Sheraton   Hilton hotels on Dalton Street.  ZUMA is what I would call a high-end chain much the same as Legal Seafoods restaurants.  The place was designed with a big Asian influence which seems to be the rage now (have you checked out the Casino here called ENCORE?)  The background music is all electronic and played quite loud so it’s difficult to have an intimate conversation. They are located worldwide in places such as: London, Hong Kong, Istanbul, Dubai, Miami, Abu Dhabi, New York City, Las Vegas, Bangkok, Rome… and now Boston.   I guess we should feel privileged? I mean those are some pretty impressive locations right? Sadly, that is where my being impressed with the place ends!!

The place was crowded and by the look of the patrons they seemed more impressed with themselves then the place, but I digress.  We found a high top table in the bar section and were quite pleased with our find as every seat in the house was filled.  Our waitress who was very friendly explained a bit about the ZUMA experience and how she has helped in the opening of 5 or 6 of their locations.   Our menus only showed us bar food, and like every restaurant I visit I prefer eating off the full menu, so of course we asked for one.   To my surprise (or shock) our waitress said we could only order off the bar menu.   WHAT??????

I called the waitress over and asked for an explanation of this odd policy and told her we would probably spend half as much by not having access to the full menu… but still she would not budge and mentioned no other reason other than “its our policy”.  I looked over and couldn’t help notice the next high top had all kinds of food not found on the bar menu, so I decided it was time to have some fun. When our waitress brought over our drinks I mentioned to her that I was disappointed and let her know that I write about restaurants (ok ok I know what you are thinking, but it’s kind of a half truth).  Of course my friend muttered under his breath, but loud enough for her to hear “Boston Globe”! ALL OF A SUDDEN her eyes got big and her entire attitude changed!  We were presented the full menu immediately and treated more like royalty (but no
freebies).

Time For The Food

Now on to the food… we ordered some Sushi, Calamari, Some sort of Chicken on Skewers and Salomon. To be honest… I was not impressed at all and actually I thought the food was a bit of a disappointment based on where we were. for instance the Calamari was cooked in a way I had never seen, it looked like little tubes and quite crispy like biting into a cracker.  The Sushi and Chicken Skewers were nothing special.  Coincidentally the local TV show on the ABC affiliate here called Chronicle also reviewed ZUMA and of course as they usually do, simply raved about the place, but their focus was not on the food, but more on the atmosphere and décor.  To be fair, I am chalking this up to Zuma getting up to speed as they have only been open for a short time.    Please feel free to try out ZUMA yourself and come to your own conclusion, but for me?  I don’t think I will be going back anytime soon.