Taking it to the Mat! 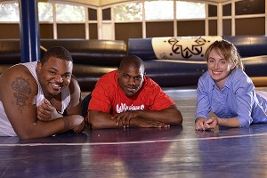 CARRY ON: A story of resilience, redemption & an unlikely family.

Riding back through the Sumner Tunnel returning to the city from the airport, I got pinged for a pick up back at the airport. “Ride-Sharing” drivers are not allowed to pick up at the airport and could face a $500 fine if caught (although this will soon change as it has been approved by the state). For some reason, I decided to take the risk and pick up the passenger; I called her and told her to act like we were old friends and to sit in the front seat with me.

Lisa Fenn is a very unassuming person at first glance and as a result, quite approachable. Once I picked Lisa up and we were well on our way to the North Shore, it didn’t take long for us to engage in a conversation.  I feel that everyone has a story, and some people draw me in with their presence. You just have to dig in to uncover more about them… and for Lisa it was a no-brainer.

To make a long story short (it actually spans over 4 years)… Lisa produced the documentary for ESPN, Outside the Lines. It is a story about two high school boys from Cleveland, Ohio: Dartanyon Crockett & Leroy Sutton. These two boys are connected in so many ways and Dartanyon often carries Leroy on his back. You see, Dartanyon is legally blind and Leroy lost both his legs in a railroad accident. Dartanyon served as Leroy’s legs and Leroy had the eyes that guided his best friend. They were drawn to each other initially by their disabilities and troubled personal lives, but their bond grew stronger through their love of wrestling because both were on the high school team.

Lisa, through producing her documentary on the boys, was immediately pulled in & made a connection and when the crew finished their assignment and packed up to leave… Lisa just couldn’t! The boys were such a positive light after all the difficulties they had to endure and overcome. They were a true inspiration!

As time went by, the boys graduated high school but did not have the money to attend college. After her documentary aired, Lisa received over 700 emails from people that wanted to help and so a fund was set up for the boys; $50,000 was raised!  The boys went to college, but it was soon evident that the boys had no foundation to succeed in this new demanding environment, so Lisa got involved in a big way!

Fast forward and the boys have succeeded in so many ways… Leroy works in animation in LA and Dartanyon went on to learn Judo and won a bronze medal at the Para-Olympics. As for Lisa… well she adopted the boys along the way, wrote a book on her story about the boys and is now touring the country speaking and inspiring others.You could say she definitely took it to the mat!